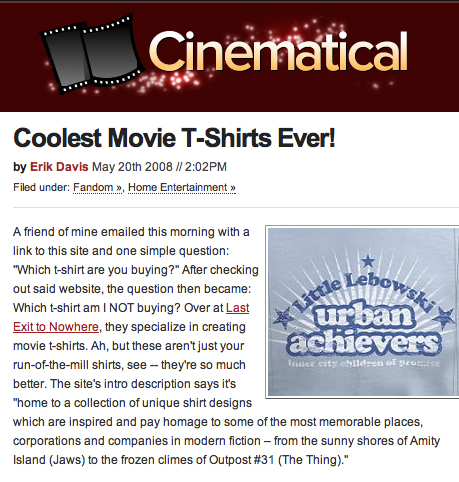 A friend of mine emailed this morning with a link to this site and one simple question: “Which t-shirt are you buying?” After checking out said website, the question then became: Which t-shirt am I NOT buying? Over at Last Exit to Nowhere, they specialize in creating movie t-shirts. Ah, but these aren’t just your run-of-the-mill shirts, see — they’re so much better. The site’s intro description says it’s “home to a collection of unique shirt designs which are inspired and pay homage to some of the most memorable places, corporations and companies in modern fiction – from the sunny shores of Amity Island (Jaws) to the frozen climes of Outpost #31 (The Thing).”

Oh yes, that’s the Little Lebowski urban achievers t-shirt to the right of your screen; they also have shirts for Hudsucker Industries (Hudsucker Proxy), Skynet (Terminator series), Shawshank State Prison (Shawshank Redemption), and much more. Then there’s the random shirts like the Stovington Academy shirt Jack Nicholson wore in The Shining, a Polymer Records shirt from This is Spinal Tap, and a shirt wearing the logo of the fictional TV station from Romero’s Dawn of the Dead. Insanity, I tell you! So many awesome shirts — honey, consider this month’s paycheck officially blown. Check out all the shirts over at Last Exit to Nowhere … 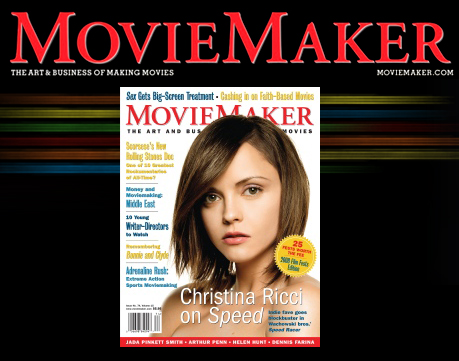 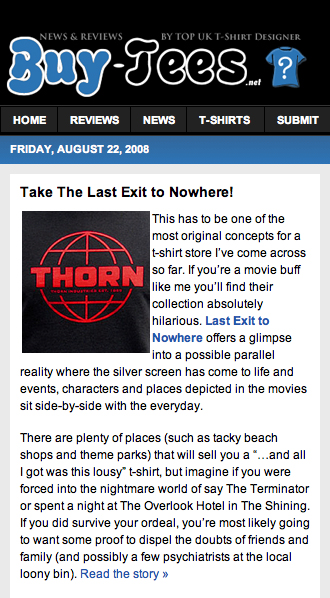 “We see an awful lot of movie merchandise here at Film Review towers and, to be honest, there’s usually not much to get excited about. But, when we saw the new range of T-shirts from UK company Last Exit to Nowhere, we certainly had our heads turned. With designs inspired by everything from Alien to Back to the Future, the guys have taken logos, designs and background information from your favourite movies and turned them into subtle and stylish T-shirts. From the more obvious, like the Amity Island T-shirt referencing the location of Jaws (below left), to the more cryptic, such as the Winchester Tavern design (above right) inspired by Shaun of the Dead, Last Exit to Nowhere has something for every movie fan”. 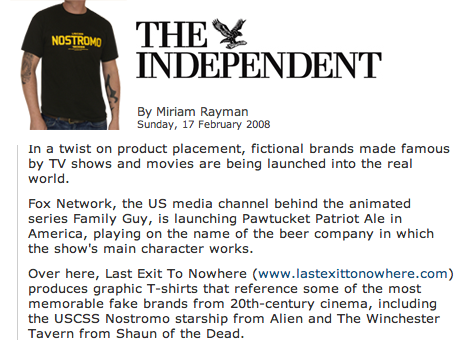 In a twist on product placement, fictional brands made famous by TV shows and movies are being lauched into the real world.

Fox Network, the US media channel behind the animated series Family Guy, is launching Pawtucket Patriot Ale in America, playing on the name of the beer company in which the show’s main character works.

Over here, Last Exit to Nowhere (www.lastexittonowhere.com) produces graphic T-shirts that reference some of the most memorable fake brands from 20th-century cinema, including the USCSS Nostromo starship from Alien and The Winchester Tavern from Shaun of the Dead. 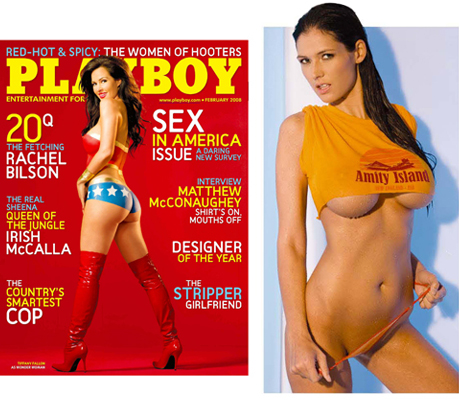 Movie geeks – sorry, “film buffs” – are just as obsessed as sports fanatics, but they have fewer accepted ways to show their love. You can wear a Raiders cap almost anywhere, but a Pirates of the Caribbean jacket reads “I have no life. Please punch me.” Luckily, the U.K.-based company Last Exit to Nowhere (lastexittonowhere.com) understands both the urge to represent and the need for discretion. Its faux souvenir tees cost around $40 and reference such fictional places and entities as the Tyrell Corporation (Blade Runner), Camp Crystal Lake (Friday the 13th), the USCSS Nostromo (Alien) and Amity Island (Jaws). So you’ll be pegged as a movie nerd only by the like-minded – at least until Last Exit makes one for Adams College.